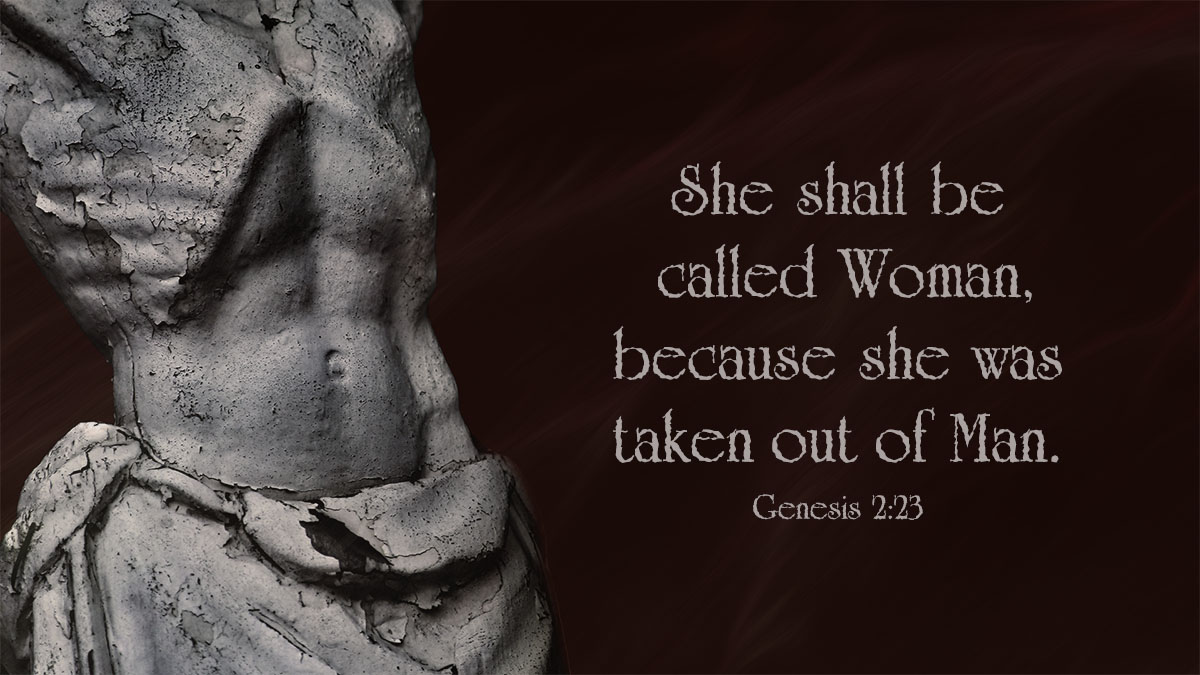 21 So the LORD God caused a deep sleep to fall upon the man, and while he slept took one of his ribs and closed up its place with flesh; 22 and the rib which the LORD God had taken from the man he made into a woman and brought her to the man. 23 Then the man said, “This at last is bone of my bones and flesh of my flesh; she shall be called Woman, because she was taken out of Man.”

This name which Adam gives to the woman contains in it a wonderful and sweet description of marriage, in which, as the lawyers express it, “The woman shines in the rays of her husband.” For whatever the husband possesses, is possessed and held by the wife also. Not only is all their wealth possessed by them in common, but their children also, their food, their bed and their habitation. Their wishes are also equal. So that the husband differs from the wife in no other thing than in sex. In every other respect, the woman is really a man. In a word the woman, as Paul remarks in his instructions to Timothy, is man-formed and man-made by her very origin; for Paul says to Timothy, Adam was first formed, then Eve from the man, and not the man from the woman.

Of this communion of all things in marriage we still possess some feeble remnants, though miserable indeed they be when compared with what they were in their original state. For even now the wife, if she be but an honorable, modest, and godly woman, participates in all the cares, wishes, desires, purposes, duties, and actions of her husband. And it was for this end indeed that she was created in the beginning, and for this end was called “woman,” that she might differ in sex only from the father of the family, since she was taken from man.

Although this name can apply in its strictest and fullest sense only to Eve, who, alone of all women, was created thus out of man, yet our Lord applies the whole sentence of Adam to all wives when he says that man and wife are one flesh. Although, therefore, the wife be not made of thy flesh and thy bones, yet, because she is thy wife, she is as much the mistress of the house, as thou art the master thereof, except that by the law of God, which was brought in after the fall, the woman is made subject to the man. That is the woman’s punishment, as are many other troubles also which come short of the glories of paradise. Had the innocency continued, the government of the man and the woman would have been equal and the same. Now the sweat of the brow rests upon the man; and the wife is commanded to be subject to her husband.

Luther, Martin, and John Sander. Devotional Readings from Luther’s Works for Every Day of the Year. Augustana Book Concern, 1915, pp. 218–19.