You Crucified Him
Scripture and a reading from Luther's sermons and devotional writings
Pastor Mark Ryman - March 19, 2022 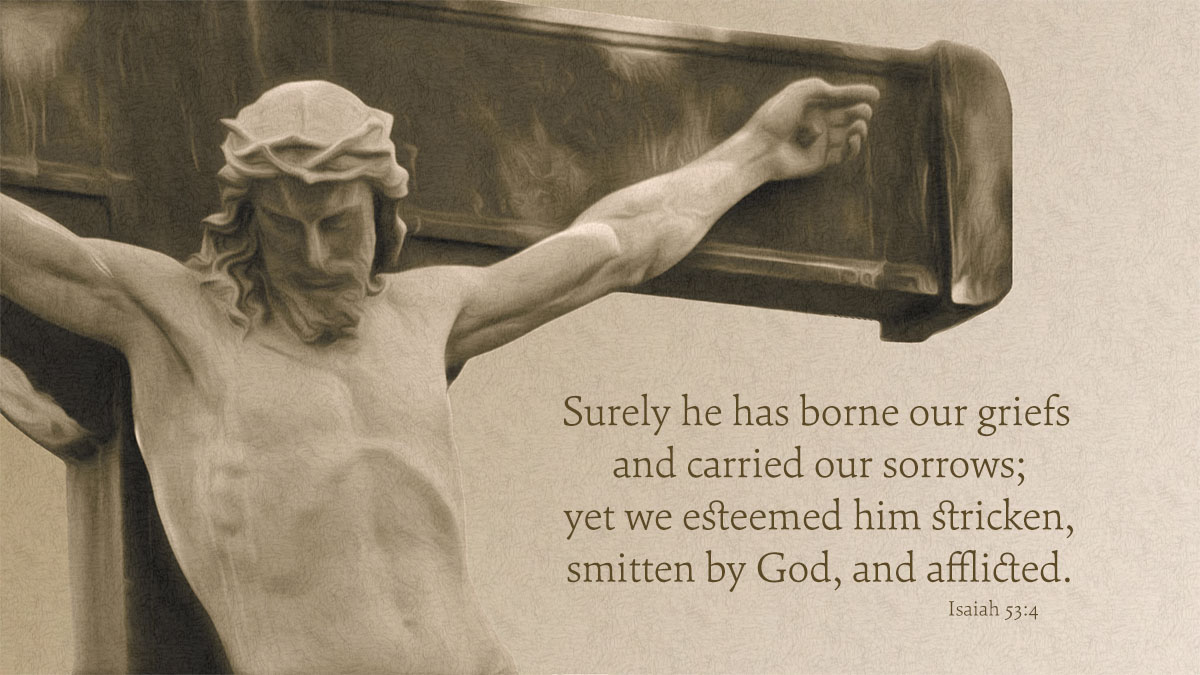 4 Surely he has borne our griefs and carried our sorrows; yet we esteemed him stricken, smitten by God, and afflicted. 5 But he was wounded for our transgressions, he was bruised for our iniquities; upon him was the chastisement that made us whole, and with his stripes we are healed. 6 All we like sheep have gone astray; we have turned every one to his own way; and the LORD has laid on him the iniquity of us all. 7 He was oppressed, and he was afflicted, yet he opened not his mouth; like a lamb that is led to the slaughter, and like a sheep that before its shearers is dumb, so he opened not his mouth.

Some reflect upon the sufferings of Christ in such way as to become angry at the Jews, sing and lament about poor Judas, and are then satisfied. Such is not a meditation on the sufferings of Christ, but on the wickedness of Judas and the Jews. Others have pointed out the different fruits springing from a consideration of Christ’s passion. The saying is ascribed to Albertus, that to think once, and that only superficially, of the sufferings of Christ is better than to fast a whole year or to pray the Psalter every day. Some people thus blindly follow him and act contrary to the true fruits of Christ’s passion; for they seek therein their own selfish interests. A third class so sympathize with Christ as to weep and lament for him because he was so innocent, like the women who followed Christ from Jerusalem, whom he rebuked, telling them they had better weep for themselves and their children.

They meditate aright on the passion of Christ, who so view Christ as to become terror-stricken in heart at the sight, and their conscience at once sinks in despair. This terror-stricken feeling should spring forth, so that you see the severe wrath and the unchangeable earnestness of God in regard to sin and sinners, in that he was unwilling that his only and dearly beloved Son should set sinners free unless he paid this costly ransom for them. There must be an earnestness here that is inexpressible and unbearable, that a person so immeasureably great goes to meet, and suffers and dies for it. If you reflect that God’s Son, the eternal wisdom of the Father, himself suffers, you will indeed be terror-stricken; and the more you reflect, the deeper will be the impression. You must really believe and never doubt in the least that you are the one who thus martyred Christ. For your sins most surely did it. Thus Peter struck and terrified the Jews, when he said to them all in common, “Him have ye crucified,” so that three thousand were terror-stricken the same day and trembling cried to the apostles: “O beloved brethren, what shall we do?” Where man does not come to this point, the sufferings of Christ have become of no true benefit to him.

Luther, Martin, and John Sander. Devotional Readings from Luther’s Works for Every Day of the Year. Augustana Book Concern, 1915, pp. 104–05.