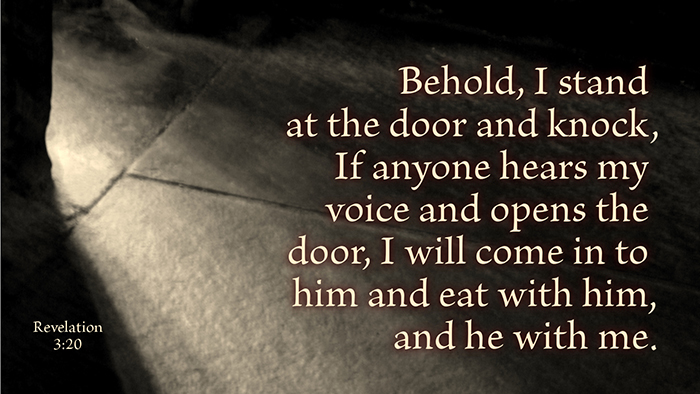 Fourthly, forgiveness of sins is something promised for Christ's sake. Therefore, it cannot be received except by faith alone. For a promise cannot be received except by faith alone (Rom 4:16). “That is why it depends on faith, in order that the promise may rest on grace and be guaranteed,” as though he were to say: “If the matter were to depend upon our merits, the promise would be uncertain and useless, because we never could determine when we would have sufficient merit.” Experienced consciences can easily understand this. Accordingly, Paul says, “But the scripture consigned all things to sin, that what was promised to faith in Jesus Christ might be given to those who believe” (Gal 3:22). He takes merit away from us, because he says that all are guilty and consigned under sin. Then he adds that the promise, namely, of the forgiveness of sins and of justification, is given, and adds how the promise may be received, namely, by faith. This reasoning, derived from the nature of a promise, is the chief reasoning in Paul, and is repeated often. Nothing can be devised or imagined whereby this argument of Paul can be overthrown. Therefore, faithful minds should not allow themselves to be forced from the conviction that we receive forgiveness of sins for Christ's sake, only through faith. In this they have a sure and firm consolation against the terrors of sin, and against eternal death, and against all the gates of hell.

Pulling It Together: I have promised to meet people for lunch today. Now, they may believe or disbelieve that promise but whether or not they believe, I will be at the restaurant. They do not need to do anything to make that happen. Lunch with me is both promised and guaranteed (...if God wills [James 4:15]). In the same way, forgiveness of sins is only promised and guaranteed because of what Jesus did, that is to say, for Christ's sake. There is no other way to receive forgiveness except to believe, to have faith, in what Jesus has done. There is no need to do anything about what has already been done.

Even if you had to do some things in order for the promise of forgiveness to apply to you, how would you know when you had done enough good? At any rate, merit has been taken away from us because we have been delivered over under sin. How much good can a sinner do in order to balance out his sin since even a single sin cannot be overcome with any amount of virtue? The issue is not so much that we sin, as it is that we are all sinners.

So Paul's oft-repeated argument is that the only thing we can do is trust God's promise. There is nothing else to do. Believe. Jesus stands at the door and knocks. Open the door, for he would dine with you today.

Prayer: Help me trust your word, Lord God, for it is all I truly have. Amen.

Come, Lord Jesus answers the many questions that arise when modern readers look into the book of Revelation. In this book readers will come to understand the first-century context in which Revelation was written—and readers will join the holy choir in looking forward to the fulfillment of God's plan, offering our own invitation: "Come, Lord Jesus."